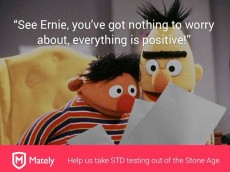 Bert and Ernie have shown up in an STD testing advertisement and the folks behind Sesame Street aren’t thrilled about it. Earlier in May, the two roommates appeared in an ad for the STD testing kits company Mately. The duo were shown reading a letter with the caption “See Ernie, you’ve got nothing to worry about, […]