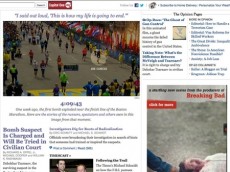 The New York Times allowed an online ad depicting a man on the ground with a bloody face to appear next to coverage of the Boston Marathon bombing. The ad appeared next to coverage highlighting the one-week anniversary of the bombing. Not surprisingly, the placement and timing of the ad immediately received complaints.  The ad […]