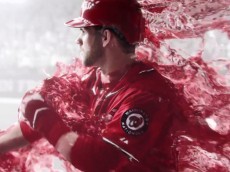 Gatorade Fierce is trying to position itself as the ultimate sports drink. Apparently that means commercials depicting Bryce Harper as one juicy, Gatorade-covered player. It also means baseballs which morph into Harper’s screaming face. The whole thing is … interesting. It’s actually pretty much the same ad we’ve seen for ages from Gatorade, but this […]