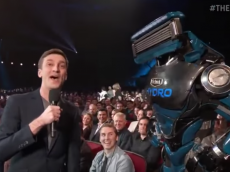 The 2015 Game Awards have come and gone, and with it, a new enemy has been born. Throughout the award show festivities, viewers were constantly bombarded with Shick’s corporate shill of a mascot, Hydrobot. Hydrobot appeared on the broadcast multiple times, inducing groans from gamers and non-gamers alike. The half power ranger, half five-blade razor man […]