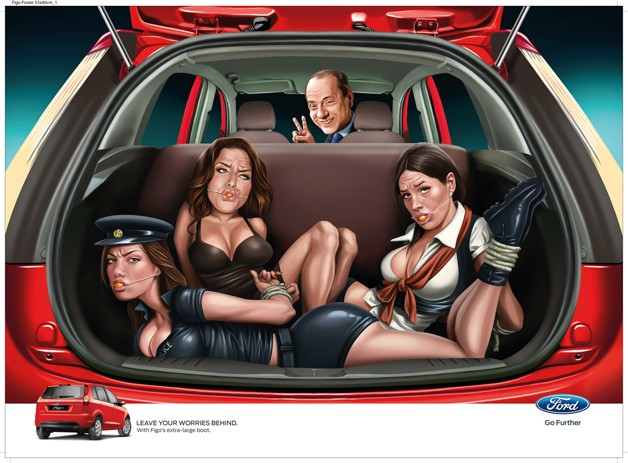 Ford of India has some explaining to do after they ran a series of ads depicting hostage and bondage situations in print materials promoting the Ford Figo hatchback. The ads were designed to promote the expanded cargo room in the Ford Figo, but it's safe to say that this might not have been the best way to go about demonstrating it. The slogan "Leave your worries behind" doesn't even seem to fit with the bizarre illustrations which hit on the heated topic of rape in India.

The ad at the top of this page depicts Silvio Berlusconi, the former Prime Minister of Italy, kidnapping three women (in very little clothing) who are tied up and wearing ball gags. Another shows Paris Hilton with three Kardashians tied up in the back. Finally, a third depicts Michael Schumacher in a similar kidnapping role.

It's unbelievable that these are legitimate ads from a legitimate company.

On their own, the ads are pretty awful and are a huge lapse in common sense. When you add in the fact Indian parliament passed new anti-rape legislation as a response to an epidemic of rapes in the country days before these print ads were released, Ford of India might receive our nomination for least tasteful ads of 2013, and perhaps of the decade.

They company and their marketing partner stated the ads "never should have happened" and that they regretted making them. Ironically, the advertisers here should have ignored Ford's slogan, "Go further", and stuck with a concept that was rooted in good taste.