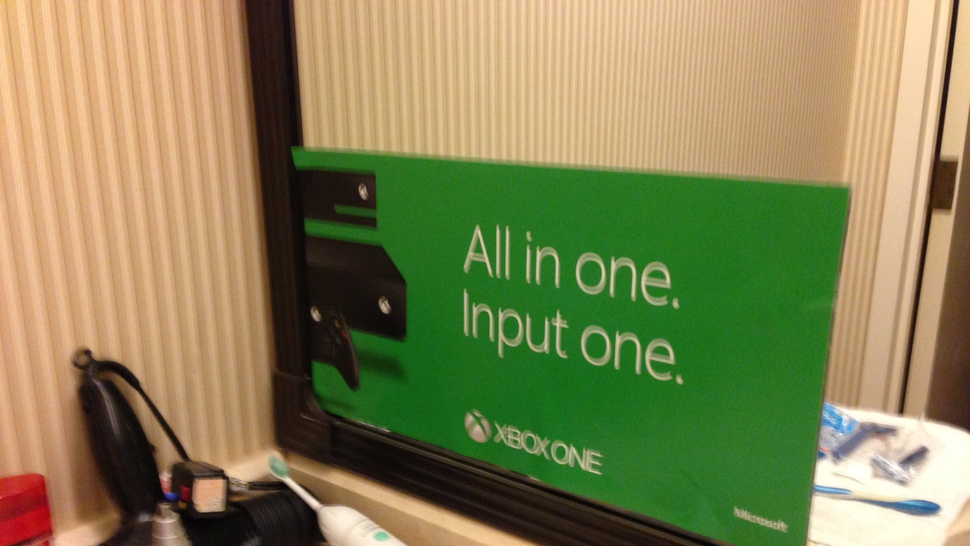 The console war has officially begun. At E3, the large electronics and entertainment expo taking place in California, Microsoft and Sony finally unveiled their new consoles. The Xbox One has already faced immense scrutiny over privacy concerns, their handling of used games and forced online connection. By comparison, the PS4 has been met with huge applause (literally – check out the reception when Sony took a stance against Microsoft's policies).

Perhaps the most interesting part of any console war or technology war is the marketing campaigns that go along with them. Microsoft clearly wanted to start their marketing right away, placing Xbox One advertisements in hotel bathrooms while guests were out taking in the press conferences at E3.

Microsoft paid at least one hotel to place Xbox One ads on the mirror in the bathroom. It's unclear just how widespread this campaign was, but we've already seen plenty of pictures of the ads on Twitter. The one above is from a writer at the gaming site Kotaku. The one below is from WPCentral.

As you can see, Microsoft deployed different messages on their ads but the underlying idea is that the One will be the device for your living room. Unfortunately (or fortunately if you're rooting for Sony) the placement of the ads had some unintended results. Aside from the fact the "All in one. Input one." slogan makes absolutely no sense, stop and consider that the company that's at the center of a huge privacy issue due to their all-seeing camera just placed an ad for their system in your bathroom without your knowledge.

Way to really drive home the issue of privacy, Microsoft.