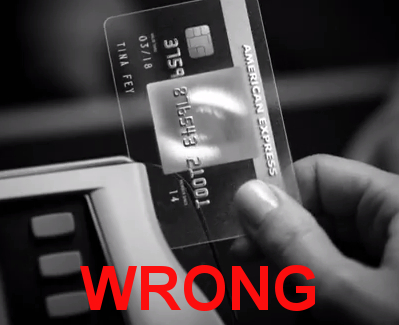 American Express is the most recent guilty party as their commercials for their new “Everyday” card with Tina Fey featured the actress swiping her card incorrectly. The transparent card from American Express was promoted heavily during the Oscars. Thanks to its clear design, the blunder was an obvious one.

Once you see it, you can’t unsee it. In fact, it’s become such a normal behavior in credit card ads that it’d actually be noteworthy if a credit card company showed their card being swiped correctly.

If you’re wondering why companies don’t just move the strip so that their logo is always displayed when being swiped, some have. Discover’s It card actually had the strip on the other side of the card. The result was infuriating, as countless cashiers would swipe the card several times before realizing the strip was actually on the other side. Discover then rolled out different It cards with the strip back in the traditional position.