BMO Harris Bank is a pretty large bank. They reportedly have over 600 branches across the entire country, with approximately 1,300 ATMs dotting the map. They’re not the largest bank, but they’re certainly not the smallest. You’d think a bank, or a company for that matter, this size would be able to afford some images in their marketing budget.

Apparently that’s not the case. BMO Harris Bank is running a Facebook advertising campaign which uses an image from Shutterstock, complete with watermark. 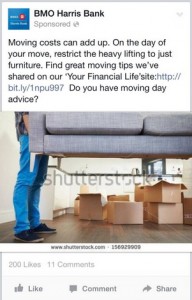 We guess BMO Harris Bank couldn’t afford the whopping price tag (2 images for $29, 5 for $49 or a monthly plan). They could probably argue they’re trying to save their customers money by not splashing out on images, but let’s be realistic and remember that this is a bank we’re talking about.

Thanks to Nick Pfeiffer for sending this our way!