If you’ve ever wandered through a Youtube video’s comment section, you quickly realized it’s a cesspool of vile, ignorant and insane thoughts. In some situations, such as Bret Michael’s Nissan ad, you find some real gems among the crazy.

There’s a good chance that you may have rage clicked the X on your browser window without completing the ad/video, and we really don’t blame you. Even if you are a big Bret Michaels fan, you may have a tough time putting up with a commercialized, nonsensical version of this song.

As expected, the Youtube comments weren’t kind. Fortunately, there were some responses which we felt accurately summarized Nissan’s ad. 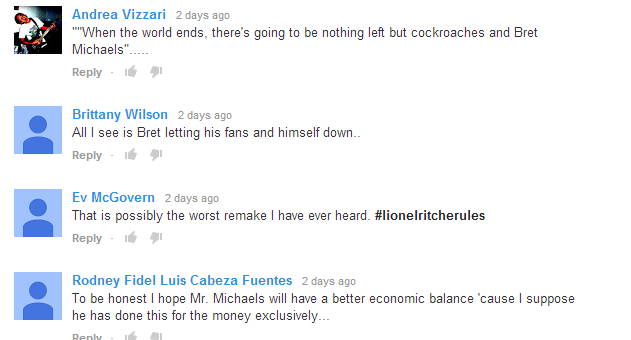 Honestly, these are actually pretty tame as far as Youtube comments go. There’s not as much profanity or conversations about Michaels’ mother or religion as you might expect, but they still get the job done in ripping this ad a new one.