A Carl’s Jr. commercial seems like the right place to comment on an immigration debate, right? Wrong.

In the burger company’s “Borderball” ad, two barely dressed models representing Texas and Mexico, square off in a game of ‘Borderball’ to determine whether the new TexMex burger is “Tex or Mex.” The net is the border wall. The whole thing is as close to pornography as you can get in a commercial, which isn’t anything new for Carl’s Jr., but this one may be the company’s most shameless. One of the models drinks water, than proceeds to pour it all over herself. We get a super close up shot of another one’s ass, and of course we get a bare bum slap teammate to teammate – all real sports traditions, I’m sure.

A man from the crowd asks another man if they should let the women know that the sandwich and the wall represent two things, to which the other guy responds “eventually,” because hot girls are playing in front of them and why stop that! 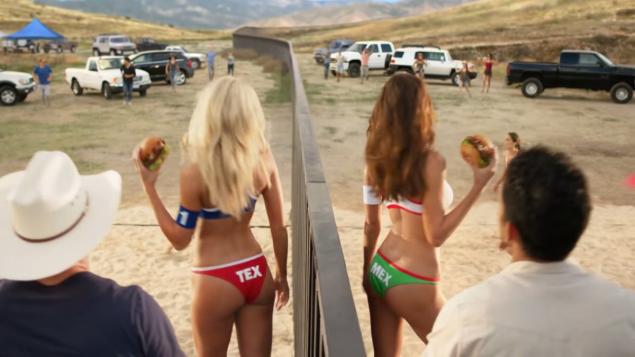 The whole thing is an obvious play on comments made by Republic Presidential candidate Donald Trump (god it pains me to type that) about building a giant wall to keep Mexican immigrants out of the country – something Carl’s Jr. denies doing.

“It is simply a fast food ad, and, like all of our ads, the premise helps to paint a picture about the food,” the company said in a statement to US Weekly. “If a connection was made between the ad and politics — it was certainly not our intent.”

Whether there was intent or not, Carl’s Jr. continues to scrape the bottom of the barrel with its  ads, which should surprise nobody.

What is fair when discussing nepotism in sports broadcasting?