The Apple Pencil is on its way. For only $99 USD, you will be able to own the fancy stylus, which is a companion accessory for the iPad. Sure, the masses weren’t sure if it was a joke or not, and Steve Jobs himself discredited the product when he was alive, but Apple seems to be sure that a simple pencil is actually going to be revolutionary.

Ikea, specifically the jokesters at Ikea Singapore, who have a long history of being entertaining, have released a new ad which mocks Apple’s latest creation and it’s goddamn perfect. 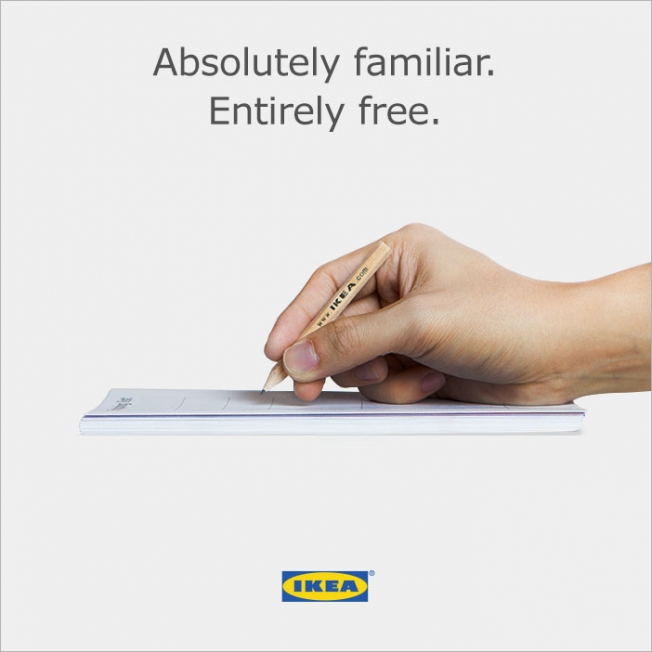 This is basically as great of a response as you’ll see.

It does an excellent job paralleling the differences between the two companies. Apple makes tech products which are generally considered very overpriced (I’m not a hater, I have a MacBook), while Ikea is the do-it-yourself furniture company where people go if they want to buy something cheaper, but not completely low-end.

For those who’ve never had the delight of going to Ikea, when you’re shopping, for bigger items you have to mark the product number (and other information) on a piece of paper with a little tiny pencil, which is graciously provided by the Swedish furniture company. It’s a forgettable staple to any visit to Ikea.

As AdWeek notes, when a Korean Ikea stopped giving out pencils for customers after a large majority were ‘swiped,’ and it was initially thought the company was cheaping out by restricting them, a Ikea official told Korea BizWire “We do not care about the pencils. We just put out new pencils if they run out. There are no statistics on the usage of the pencils by country. One thing clear is that we will not restrict the use of the pencils.” Quite the contrast to losing your $99 stylus.

The other part of this ad, which really elevates it, is the slogan. “Absolutely familiar. Totally Free,” is a play of when Apple said “Apple Pencil is designed to look and feel like a familiar tool,” during its introductory video** for the product – and how ridiculous that statement is. Yes, we get it, your pencil is designed to act like a pencil.

The folks at Ikea nailed this one. Despite that, I’m sure the Apple Pencil will be another hit product for Apple. They can basically make anything at this point – Apple Toilet, Apple Pizza, Apple Apples… Anything. They’ll be able to print money from all the people who will eat this new product up, no matter how silly the cost seems.

** I urge you to watch the video. While it shows off the capabilities of the Apple Pencil, which seem to benefit how artists and creative people will use their Ipad, it hits all of the cliches for a product which is almost entirely unnecessary. It’s got a dramatic British voiceover (by CDO Jony Ive), intense music, young hip art designs, while everything is super sleek and minimalist. **