I’ve written extensively about the mobile game Game of War and how great their ad campaign featuring supermodel Kate Upton was at drawing in fans by selling sex appeal, and also how the company made a massive gamble by dumping Upton in favor of singer Mariah Carey. Well, the first ad featuring Carey was posted on TMZ and it’s a huge step back for the game.

The one minute spot, which I’m not entirely sure is the finished product or not, is your standard Game of War commercial. There’s lots of medieval fighting, dragons breathing fire and a large breasted woman.

The big joke in this spot is two soldiers are nearing their death in the midst of battle, and pull out a cell phone to call for help. When they press the button, help comes their way – whether it’s a long, blonde haired man with gold armour, a scantly dressed woman with a battle axe, or a huge brute with a massive Warhammer – as Carey’s hit ‘hero’ starts over with each call for help. On the final press of the button we see a dragon getting shot out of the sky, while the camera pans to Carey who says ‘time to be heroes guys,’ as the spot ends.

While the commercial isn’t spectacular, its expensive cost and the star power behind it make it seem very underwhelming. Here’s the reported terms of the deal, which I wrote about in June.

TMZ is reporting that Machine Zone reached a seven-figure deal with Carey to appear in a 30-second spot, that will allow the company to use her music in future promotions as well. They’ve also upped the ante, and hired director Alan Taylor – who’s credits include Game of Thrones, Thor: The Dark World and the upcoming Terminator Genisys – to shoot the spot. It’s going to be a bonkers 30 seconds.

Considering all the talent, wow. Again, it may be an unfinished commercial as it wasn’t officially released by the company and it’s not in HD, but man, it doesn’t work nearly as well as Upton’s turn as the face of the game did.

I don’t know if it’s just me, but the way they position Carey in these spots also makes things seem off proportionally. Like she’s edited into the shot, or there’s some camera trickery going on. It looks like a bad magazine Photoshop. 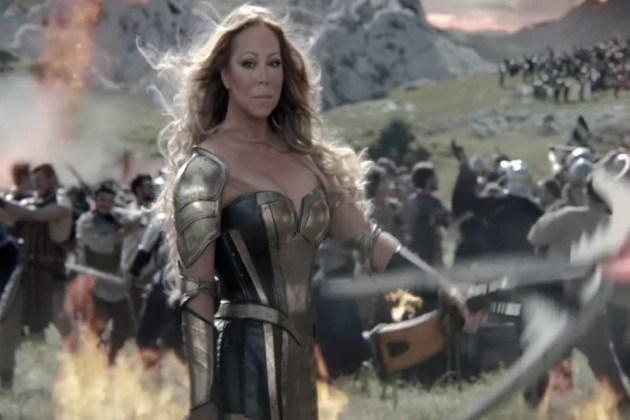 The other problem in this spot is it features Carey for about three seconds. Now I don’t know the full agreement of her reported seven-figure contract, but if it’s just for one commercial, this is a huge waste of resources. The perk of having Carey’s music available to use is nice, but factoring in how much Upton was featured in previous ads, this isn’t good enough.

Now, I’ll give this campaign the benefit of the doubt, it’s technically not an official commercial as it wasn’t released by company, but if this is a sign of things to come, Game of War commercials just got a lot less entertaining.