Mercedes has pulled an advertisement for the 2017 Mercedes-Benz E-Class after advertising the vehicle as a self-driving car, a claim which wasn’t 100% true.

According to Jalopnik, an advertisement was removed following complaints to the FTC over a commercial which described the car having a self-driving feature. The spot showed a driver lift his hands off the wheel. The claim was reportedly an exaggeration, as the cars self-driving feature only works for 30-seconds at a time before drivers need to take the wheel.

Mercedes spokesperson Donna Boland told Automotive News, the ad was dumped due to potential confusion about the self-driving aspect.

“The new 2017 E class is a technological tour de force and is a significant step towards achieving our vision of an accident-free future,” Boland wrote in an email. “We do not want any potential confusion in the marketplace to detract from the giant step forward in vehicle safety the 2017 E class represents.”

As Jalopnik notes, Mercedes had no issue previously describing the E-Class model as ‘self-driving,’ in magazine advertisements. 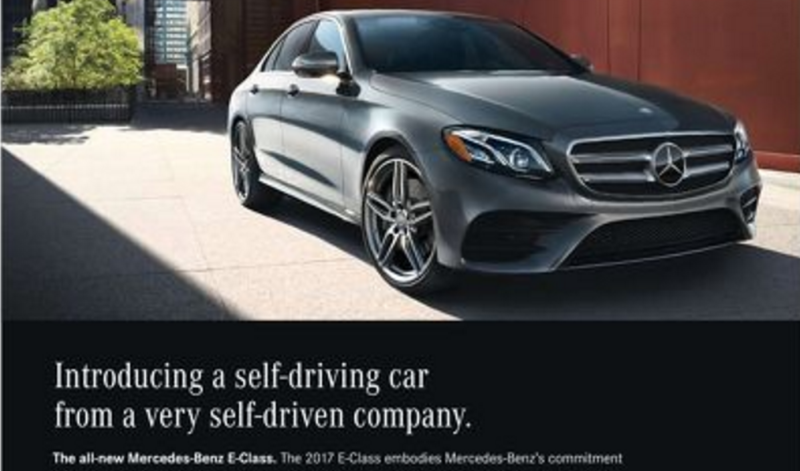 It’s a dangerous way for Mercedes to advertise.

Self-driving and self-driving for just 30 seconds are two totally different capabilities. It’s misleading Mercedes-Benz thought it was appropriate to advertise the car as such. The 30-second feature is neat and innovative, but a far cry from what was being advertised.

Next time, instead of pretending to have a groundbreaking feature, Mercedes should you know, actually have the feature before it makes wild claims.

Is there anything Adam Schefter could do to get in trouble at ESPN?