Posters for the upcoming spy movie Jason Bourne are the latest Hollywood advertisements to draw ire for its depiction of violence.

Tami Sagher, who’s a producer on the hit HBO series Girls, took a picture of the Jason Bourne ads, where the titular character is holding a gun. In the advertisement, the gun the character holds is peeled off and partly placed in his mouth. She wrote “Hey New Yorkers, what if we do some peeling & get rid of the guns in the Jason Bourne subway ads. So tired of guns.”

Hey New Yorkers, what if we do some peeling & get rid of the guns in the Jason Bourne subway ads. So tired of guns.

Sagher’s post got a boost when Girls star and co-creator Lena Dunham reposted the photo (now deleted) on her Instagram page, with the caption “Good idea @tulipbone! Let’s go!” encouraging people to peel off the gun from the ads.

Guns are certainly a contentious topic in the United States. With the mass shootings that have occurred and the alarmingly easy access to acquiring guns, something needs to change. I’m not sure encouraging people to peel off guns from a poster is going to help. It’s like the violence in video games argument – it’s not really the problem and just distracting people from the real issue. This Gawker comment sums up its ineffectiveness.

In the Toronto subway, there are posters like this one for the TV show Archer, where the main character is holding a gun. Should we peel it off as well? 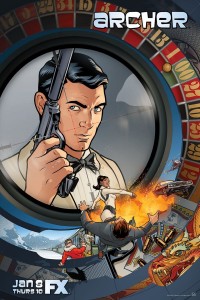 Sagher and Dunham’s hearts are in the right place, but the call to peel off guns isn’t an effective cause as it’s not the real issue. It’s just a movie advertisement, not a poster for the NRA. They’re encouraging people to deface subway posters. At the end of the day, it doesn’t solve anything. The ad is fine.