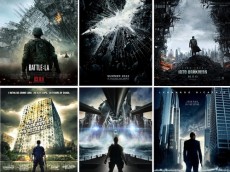 Star Trek Into Darkness has released a new poster promoting the new film that's slated to be released in May of 2013. The poster, seen above, seems pretty familiar doesn't it? The first film that comes to mind is The Dark Knight Rises, which had a poster nearly identical to the Star Trek poster above.  […]