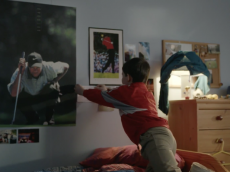 Nike has released an effective new ad showing how much Rory McIlroy admired Tiger Woods growing up. The ad titled “Ripple,” tells the story of McIlroy’s childhood, illustrating just how important Woods was in McIlroy’s development and progression to becoming number one ranked golfer in the world. In the ad we see McIlroy’s childhood idolization of Woods on display. His room […]

The folks over at DIRECTV have a campaign going where they show just how awful and annoying cable can be. The idea is a strong one. If done properly, we should all be enjoying humorous ads that deliver a crushing blow to the cable industry while depicting DIRECTV in a positive light. …Instead, we get […]