According to Fortune, Burger King paid Floyd Mayweather $1 million dollars to have BK’s mascot, The King, appear in the boxer’s entourage. I am fully aware that by writing this I am assisting Burger King’s goal to cause a stir on the Internet and falling, so perhaps I can take a different direction than the other million blogs about this.

I’ve discussed Burger King before on Awful Ads, and this move seems like a smart one and the next logical step in updating Burger King’s image to the latest version of the social internet. Before joining Money’s entourage, BK’s ad agency, David, brought back Chicken Fries in a successful ongoing campaign. Crashing the big fight was a bold move but it makes sense to go big for such an anticipated event. The investment in Pacquiao v. Mayweather by “David” was a calculated risk that paid off.

The boxing match was a great choice because most non-boxing laypeople want to bring up the fight in conversation and know something about it at the internet water cooler, but would prefer not to talk about the actual 12 rounds of fighting. 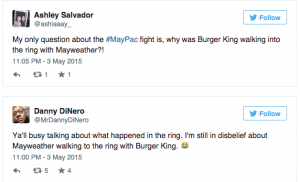 A second way the King’s appearance has reached people is websites like this one, discovering the hefty price tag and informing the world from thousands of outlets using the brand’s surprising fight presence (an ad) as content at no cost to Burger King. At Awful Ads our focus is covering this type of ad but this time a million other blogs are spreading a brand for free (which happens a lot nowadays). These outlets reach the people of the internet, the ultimate goal, but not the full range of the advert’s ripple. The cost of the spot was discovered and a second wave of blogs have come out with the price tag as the subject.

Burger King was criticized for partnering with Mayweather, who has been charged with domestic abuse and is objectively a terrible guy. Tweets and articles began popping up about the decision to align with such a maligned figure but nothing has come of them besides increased traffic for Burger King. As a comparison, Hublot, a company that also forked over $1 million, ended up on Mayweather’s boxing trunks and have received almost no post-fight buzz at all. The internet will be talking about something else tomorrow but for the time being, Burger King got what it wanted, reaching millions of people who could not care less about boxing. This is marketing in our current internet age and Burger King has decided to finally step into the ring.