Barbie has been criticized in the past for how it creates an unrealistic body image for young girls. Recently, Barbie has been fighting that perception with products and advertising focused on empowering young girls as the toy company tries to fix its image problem. This ad goes a long way in that effort because it sends a great message while also being super cute.

Awwwww. It’s not just cute and smart, the commercial is funny. These girls want to be teachers, veterinarians, business women, coaches and Barbie wants their dolls to be the vehicle for those dreams.

Personally, I believe dolls and toys like them are losing ground to tablets and video games. Dolls are important because, as the ad stresses, imagination is an important part of being a kid and physical toys are great catalysts for the imagination. The girls in this spot have great imaginations however unprepared they are for their dream jobs. The comedy that ensues is well done. The best is in the airport.

“You’ll never believe what happened at the office”

I’m sure the woman next to her is a paid actress but she is legitimately cracking up when she hears that line.

The commercial closes with the reveal that the girl is just pretending to be a professor with Barbies, and that she’s not just a Barbie hanging around the mansion with Ken. The spot successfully changes the script on the notion that girls want to be Barbie and instead show that they can use Barbie to imagine they ‘Can be Anything.’ 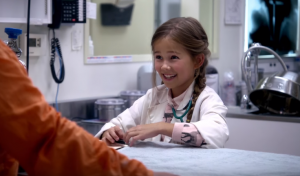