Hulu is making its jump into the deep end with a splash. In this animated commercial, the streaming service showcases its newest toy – every Seinfeld ever. I’m surprised that they decided to go animated when they have the rights to the video of one of the most popular shows in the world. In any case, the widespread love of the show should boost subscription numbers and put Hulu a little closer to their streaming competitors.

The commercial is funny to those who have seen the show and are big fans like myself because we immediately recognize the quotes. How well would someone who hadn’t seen the show receive this ad? That’s the big question. If Hulu can get people who weren’t previously interested in Seinfeld to pick it up now, the big gamble would pay off.

For me, the there are two issues with Hulu owning the streaming rights to Seinfeld. Personally, I enjoy watching a random episode on TBS once in a while. There are certain shows where you’d rather see a random one than choosing it because you have no expectations going in and there are hardly any long story arcs to worry about. Secondly and more importantly, Hulu is one of the only streaming services to have a paid service that still has ads during shows. This makes sense for its regular business of streaming current tv shows after they air. But paying $7.99 to watch ads can be a tough pill to swallow for most people and its why I wonder whether Seinfeld will be a hit for Hulu because its on everyday on TBS for free. Will Hulu be able to double dip on subscription and ad revenue? Or will it be “no soup for you!” (sorry I had to). 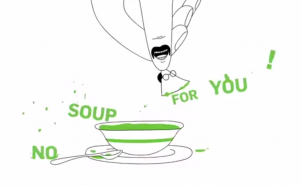 What were the five best documentaries of 2022?

12-year-old running back goes viral, does not look 12