I never thought I’d get excited about a blood-thinner, but this Xarelto commercial is a tour de force of manliness I just can’t ignore. The ad features Kevin Nealon, Brian Vickers, and Arnold Palmer who at first glance are an unlikely trio.

My theory is that the combination of Nealon (a big name comedian from yesteryear) Vickers (a NASCAR driver), and Arnold Palmer (famous old golfer) completely cover everything ‘Dad’ related. Just by being a man over 50 you mathematically must recognize at least one of the stars, so all three playing a round of golf together is just icing on the cake for the blatantly targeted audience.

Oh yeah, and they also all take Xarelto. 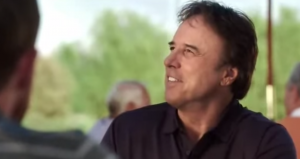 “Make mine a Kevin Nealon”

The unintentional laughs come when any of the celebrities start talking about Xarelto on the golf course or at lunch like it’s an average man’s conversation starter. Man did those blood tests get Vickers off of his game or what. That’s if you’re ignoring the fine print that says Vickers can’t race anyway while taking a blood-thinner. Massaging the truth and listing side-effects take time so the ad clocks in at 2 minutes, long enough to feel like an infomercial. 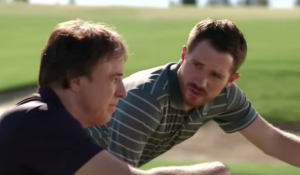 Come on Vickers talk about something else for once.

Stephen A. Smith was approached about running for Senate: "I would piss off millions."